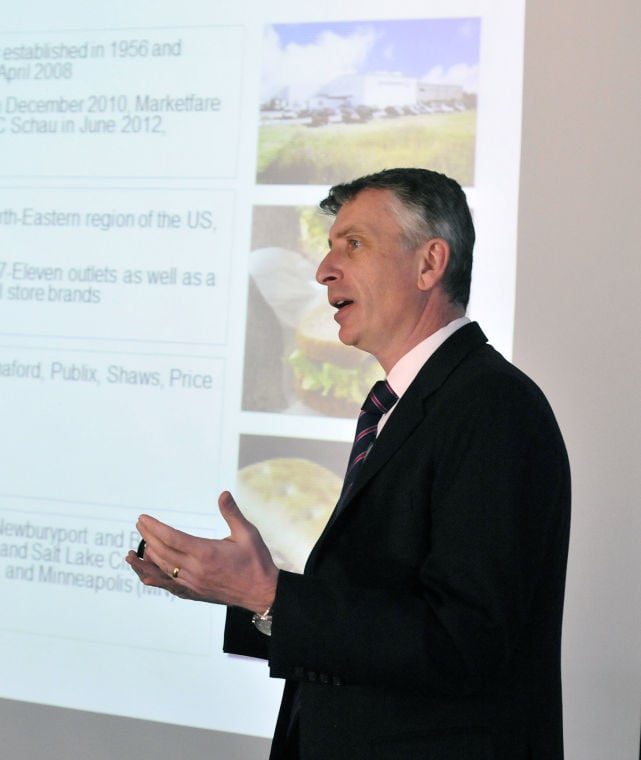 Liam McClennon, the CEO of Greencore USA, gives a presentation about his food production company during Tuesday’s QDC Board of Directors meeting. The board voted unanimously to lease land to Greencore for a new food production facility, which will employ nearly 400 people by the time of its planned opening next spring. More than 300 of those jobs will be new hires.

The state Supreme Court is reviewing an appeal for a new …

Liam McClennon, the CEO of Greencore USA, gives a presentation about his food production company during Tuesday’s QDC Board of Directors meeting. The board voted unanimously to lease land to Greencore for a new food production facility, which will employ nearly 400 people by the time of its planned opening next spring. More than 300 of those jobs will be new hires.

When officials at Greencore USA were looking to build a new facility to replace two aging facilities in Massachusetts, the Quonset Business Park grabbed their attention for a few reasons. Chief among them were two unique programs recently created to attract new business to the area: the site-readiness program, and an incentivized lease program.

“The site readiness program was a big draw for us because we’ve got a big commercial pressure on us to get things done quickly,” said Liam McClennon, CEO of Greencore USA.

On Tuesday, the Board of Directors of the Quonset Development Corp. – which oversees development in the 3,207-acre business park – approved a 50-year lease with Greencore to build a 107,000-square-foot convenience food manufacturing facility on 15 acres. The site is located on the corner of Commerce Park Road and Ocean State Drive, just north of Ocean State Job Lot’s corporate offices.

Groundbreaking on the site is expected to take place May 1 because of the site-readiness program, which streamlines the permitting process for developers. The program was adopted by the QDC board last August.

The site-readiness program essentially completed the preliminary study and review work on 35 sites in the business park, and acquires the necessary permits from the state Department of Environmental Management, the Coastal Resources Management Council, local building inspectors and the Office of the State Fire Marshal.

“The Quonset site-readiness and incentive programs were important factors in securing Greencore as a new tenant at the Quonset Business Park,” said Marcel A. Valois, executive director of the Rhode Island Commerce Corporation and chairman of the QDC’s Board of Directors. “We compete with neighboring states for business growth and having pre-permitted, shovel-ready land available makes us more competitive.”

The new facility will also have the ability to expand by another 40,000 square feet in the future – creating space for another 234 employees.

McClennon said salaries for employees range from $10 to $11 an hour for new hires on the productin floor to six figure salaries for supervisors.

“We have wide mix of demand for skills and people,” he said. “It’s a nice blend of opportunity for a variety of different people, from entry level jobs all the way to highly skilled, highly technical jobs.”

Greencore also will benefit from discounts on the lease of the property based on the length of the lease, the number of employees and wages paid.

In August, the board approved two types of lease discounts for future tenants in an effort to attract new businesses to the Quonset Business Park and provide incentives for them to sign long-term leases.

“Therefore, a company with fewer but higher-paying jobs can benefit from an incentive that is typically based on number of jobs without regard to the salary or wage rate,” QDC Managing Director Steven J. King said at the board’s August 2013 meeting. “Additionally, a payroll-based incentive simply relies on quarterly reports that employers already file with the Division of Taxation, which makes the program easy to administer and places no additional burdens on tenants.”

The payroll-based incentive is .5 percent of the annual wages that a company pays its employees.

Those numbers could increase sooner if the company expands within the first 10 years.

As Greencore seeks to expand its reach into the New York market, the location of the Quonset Business Park was seen as a major selling point.

Gov. Chafee and Congressman James Langevin were in attendance for Tuesday’s meeting and shared their enthusiasm in welcoming Greencore to the Ocean State.

“This is a good day for Rhode Island, and another indication of how investing in our state assets can help create more jobs and propel our economy in the right direction,” Chafee said in a statement. “I commend Greencore for bringing a growing company here and we look forward to showing the world how our resources and workforce can help a company achieve great success.”

Whenever Chris Church posts new content, you'll get an email delivered to your inbox with a link.

Email notifications are only sent once a day, and only if there are new matching items.

Looks like we'll be seeing al to of edibles in storage on the plot of the business park sometime soon. I think a lot of the other business units that are moving into the business park would love the idea that they have a food solution in the form of a neighbour don't you think! Haha! In any case, it looks like almost everything is ready to go for Greencore, all that's left is to unpack their things from the storage container and get set up! !

Good to know about business park areas like this created to help businesses flourish! It could really make a lot of difference to the smaller companies too!

Welcome to the discussion.

Keep it Clean. Please avoid obscene, vulgar, lewd, racist or sexually-oriented language.
PLEASE TURN OFF YOUR CAPS LOCK.
Don't Threaten. Threats of harming another person will not be tolerated.
Be Truthful. Don't knowingly lie about anyone or anything.
Be Nice. No racism, sexism or any sort of -ism that is degrading to another person.
Be Proactive. Use the 'Report' link on each comment to let us know of abusive posts.
Share with Us. We'd love to hear eyewitness accounts, the history behind an article.

Based on the recent findings of the R.I. Board of Elections, should House Speaker Nicholas Mattiello step down?

Sorry, there are no recent results for popular videos.

Sorry, there are no recent results for popular commented articles.

Mystic Seaport - The Museum Of America & The Sea

Theatre By The Sea